The sorry state of jQuery plugins

Published on 2016-03-31, under Programming, tagged with backbone, javascript, bootstrap and jquery.

When adding jQuery widgets to enhance your web app, you'll find two possible approaches in their implementation: On one the plugin does everything for you (and by everything I simply mean too much), on the other, the plugin does the minimum. But of course there is a wide range in between. 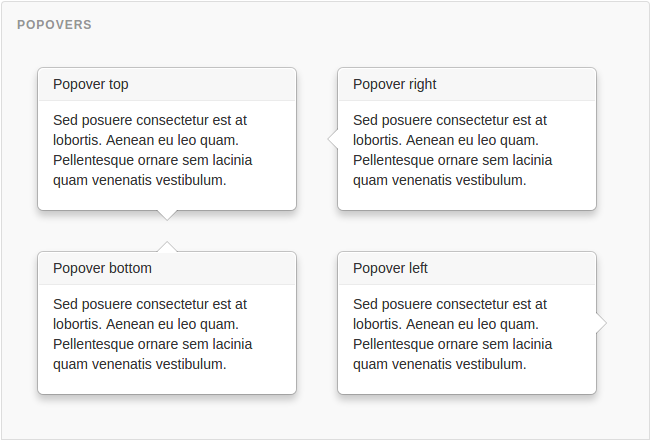 The way of jQuery plugins¶

To begin, lets see what Boostrap offers for using it's plugins. A plugin (ie. popover) can be instantiated directly via HTML with lots of data- attributes that will be picked up automatically:

But both can be combined so that the JavaScript options override the data- attributes. Either way, most plugins follow these techniques and allow certain amount of customization so that we can hook into some of it's functionality via options and callbacks.

A more extreme example would be the fullCalendar or the jQuery datepicker plugins. They are in charge of rendering a rather complex DOM hierachy inside an empty div or input you define, and everything is done through configuration. Since the plugin is controlling some inner state you are forced to initialize it and follow the rules it immposes.

This may work for simple scenarios, but when you need more control, you'll be forced to implement hacky tricks or even roll your own solution.

One of the best things about Bootstrap's widgets is that they can be represented entirely with HTML, without the need to initialize them through JavaScript.

As a follow up of the popover example, the snippet below shows how to represent a popover widget. Notice how we can use classes like bottom to specify the state we want for this popover.

Yes, it won't be positioned, and won't be dismissed when you click somewhere else in the page, but it can be reused as a template for your custom widget.

Say we needed to take full control of a popover. I wrote a simple Backbone view to achieve that:

We've got a minimum working piece of popover that we control, but it's not positioned. So we can make use of another library that knows how to position elements. In this case I'll use Tether and modify the popover view so that it can clean up itself before it's removed.

We have combined Bootstrap for presentation, Backbone for logic and Tether as a helper for positioning elements. Live demo here.

This video shows the process of hidding functionality and adding lots of cruft to jqueryfy a piece of code. This is exactly what we need to avoid. More often than not I see plugins hiding their methods behind closures, when they could be opening them as documented building blocks to be used at your will.

It's perfectly fine if plugins expose a simple way to cover the 80% of use cases or some basic functionality. But it's clear that pure libraries tend to outperform ready-made plugins in terms of flexibility.

If only plugins allowed a clear separation of UI and logic, and that logic be easily extendable, then you would be able seamlessly integrate it with the rest of your frameworks.